I’m currently living with an old friend. The other day, he had a question about my blog. “You mostly write, like, motivational stuff, right? Like, mindset?”

“I guess that’s what I tend to blog about, yeah.”

It was completely innocent. He was just curious if I ever wrote articles about movies. However, I was stuck on one thing. “You write about motivational stuff?”

I was unreasonably upset. I didn’t like being summed up like that. It felt embarrassing to admit that’s what I write about. I wanted to just hide behind the blanket of “I write.” I didn’t like people being able to judge the things I write about — much less the writing itself.

The terrible thing is that it wasn’t even criticism, and I still freaked out. And I’ve been doing this for years.

Here’s the deal: you will be embarrassed if you make shit and put it out there. Even for the greats — the majority of people don’t enjoy it. Even for unreasonably popular things like Star Wars, well over 50% of people aren’t fans.

What’re the odds everyone is going to like what you do? Zero.

In fact, if you try to please everyone, you please no one.

Why You Never Start

In school, it’s possible to get 100%. That’s so not the case with writing it’s stupid.

You can’t be 100% done. You can’t please your audience like they’re your teacher. Even if you completely nail it, you will still probably hear nothing but crickets.

If you won’t start now, you’ll never start. Fucking start. God. You don’t realize how common your problem is. And there is only one solution. START. Write stuff and publish it.

You will be embarrassed. That’s fine.

In Germany, I was hanging out with some new people. Germans. One asked what I do. “I’m a writer. The most exciting thing is TV. I also write books and have a blog.”

I was so offended. Excuse me — I used to think that when I could finally say, “I’m a writer,” everyone would assume I’m the coolest person on the planet.

That very much did not happen.

Not everyone is supposed to like what you do. Not even your mom. Hell, not even you half the time. If only 1% of people who cross paths with your work respond to it at all, you’ve got a hit on your hands. Watch out.

What are the chances, then, that your friends or family will respond to your work? 1 in 100, maybe. Should you base your level of confidence on what your friends think? Hell no.

Making stuff is a weird business. It’s a game of being controversial enough that some people like you and some people hate you.

There is no one out there who makes art so bland that no one hates it. You aren’t going to be the first.

You can’t manufacture fans by being what you think they want. Those people are already taken care of by someone much more popular than you. You have to be yourself, as cliche as it sounds.

This advice is two things:

You literally cannot account for all the variables in the world enough to pretend to be something you’re not. It’s the difference between making a face and working a face-shaped puppet. What’s easier?

Feel how you feel about things and tell us about them. Then, do it enough times that you find people who give a shit.

Photo by William Moreland on Unsplash 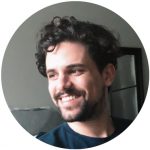 Taylor Foreman travels the world, writing and coaching.   He helps artists learn business skills and navigate the intersection of art and money.  You can find his newsletter at The Creativity Gap.

Share this ArticleLike this article? Email it to a friend!
Email sent!